Convert Decimal IP address in Binary and Binary in Decimal

Both addresses are 32 bits in length. These bits are divided in four parts. Each part is known as Octet and contains 8 bits.
Octets are separated by periods and written in a sequence.

Two popular notations are used for writing these addresses, binary and decimal.

In binary notation, all four octets are written in binary format.

Examples of IP address in binary notation are following: –

Examples of subnet mask in binary notation are following: –

In decimal notation, all four octets are written in decimal format. A decimal equivalent value of the bits is used in each octet.

Examples of IP address in decimal notation are following: –

Examples of subnet mask in decimal notation are following: –

In real life you rarely need to covert an IP address and subnet mask from decimal to binary format and vice versa. But if you are preparing for any Cisco exam, I highly recommend you to learn this conversion. Nearly all Cisco exams include questions about IP addresses. Learning this conversion will help you in solving IP addressing related questions more effectively.

Understanding base value and position

In order to convert a number from binary to decimal and vice versa, we have to change the base value. Once base value is changed, resulting number can be written in new system.

Since IP address and subnet mask both are built from 32 bits and these bits are divided in 4 octets,
in order to convert these addresses in binary from decimal and vice versa, we only need to understand the numbers which can be built from an octet or 8 bits.

Following table lists the position value of each bit in an octet.

To convert a decimal number in binary number, follow these steps: –

Let’s take an example. Convert a decimal number 117 in binary.

Once above comparison is done in rough paper: –

As we know IP address and subnet mask both are built from 4 individual octets separated by periods. We can use above methods to convert all octets individually. Once all four octets are converted, we can merge them again separating by periods. 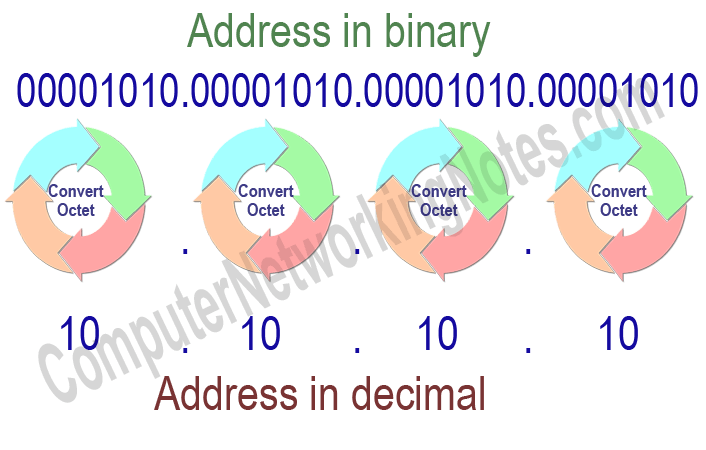